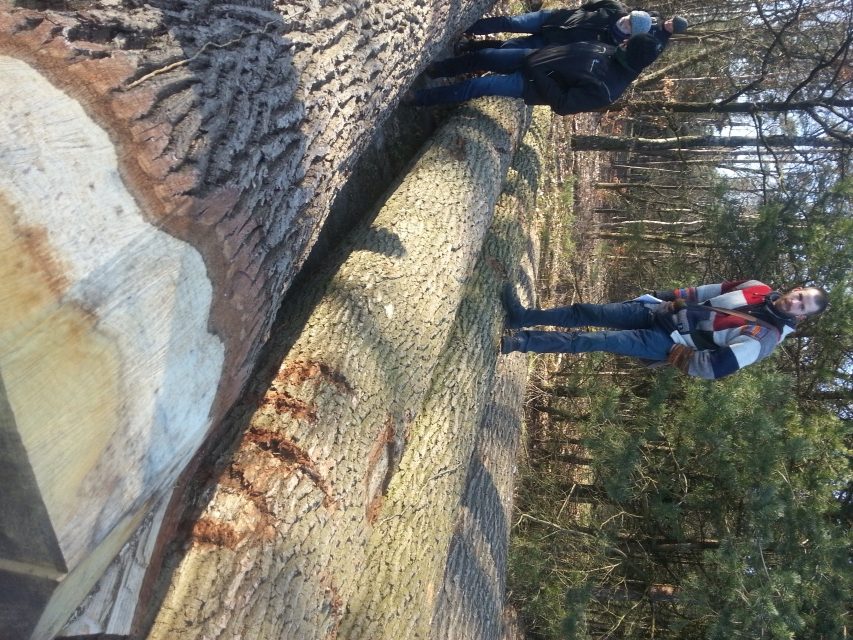 Usually Thursday is one of the days that I am outdoors in the forest or at the Edible Log Farm. Last Thursday was different. This time I had signed up for a mini-symposium with the titel Wood Quality vs Biodiversity.  After two short lectures all of the participants drove to a nearby forest for the best part of the afternoon… looking at amazing logs.
Along the edge of the forest as far as my eyes could see there were huge logs lying next to each other on the ground waiting patiently for new owners. These logs had been brought to the viewing site the last few months from all over the Netherlands and Belgium, from parks and private forests, from public land and out of sheds. Relatively common tree species such as oak, beech, robinia, walnut, elm, douglas fir were well represented but less well-known species such as magnolia or cucumber tree and bald cypress were also present. These topnotch specimens were part of the 439 lots and the 1250 m3 that were auctioned Saturday 24th February at the yearly Log Auction. These high quality logs were waiting to be turned into products such as floorboards, table tops, furniture, historical features and artistic objects.  A wonderful way to increase awareness of trees and to increase the value of wood.  Even the collection of boxwood logs that had been lying around in a shed for the past 35 years had found a place between the giants. One of the participants was jumping up and down with glee at the sight of these very nondescript boxwood logs. We all looked at him with one eyebrow raised in surprise. He explained that these logs with this length and diameter were hard to find…… boxwood for bagpipes. Of course, why not…!!??