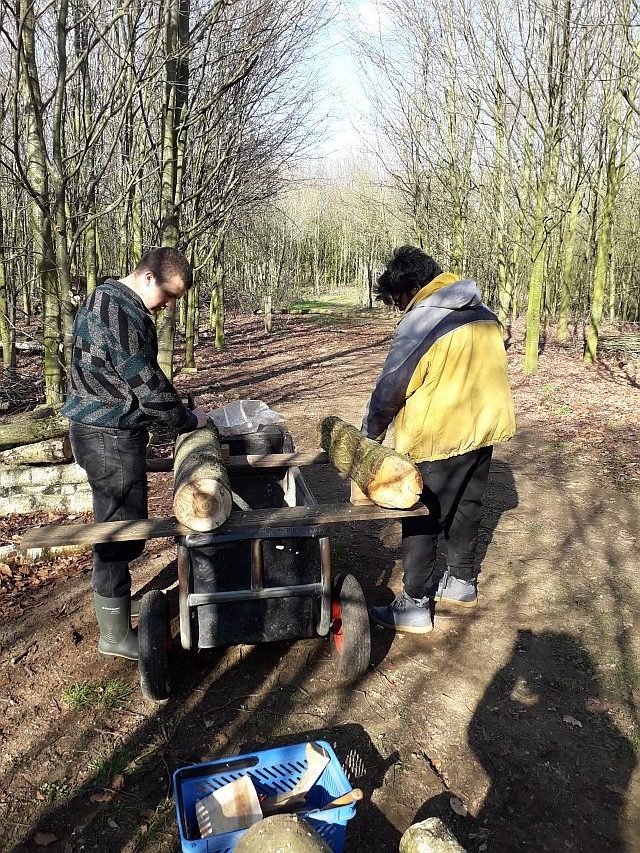 And now a couple of weeks after I decided that it was better to get the logs to the people instead of people to the logs, the feeling of panic has subsided and has been replaced with a steady  “tick tick tick”: the noise of ticking the plugs with mycelium into the logs. Friends, colleagues, family members, fresh pensioners, families with frustrated pubers and fed up home workers all over the eastern region of the Netherlands have all received 20 – 60 logs which they can inoculate  whenever they want to during the next couple of weeks. Other people have helped me during one of several Volunteers Work days at one of the Edible Wood Farms and have all gone home after a job well done with their own inoculated log as a token of gratitude. Several international students from Wageningen University helped me a couple of weeks ago to get the last logs out of the forest in Gaanderen and then stayed to inoculate the logs with oyster mushroom.
The next few weeks will be spent inoculating the last hundred oak logs stacked up on my parking place. The oyster mushroom logs that were inoculated last week have been stacked up in my back garden and covered with a couple of rugs and tarpaulen to protect them from the cold. The garden birds and field mice have it already in use. The oak logs that were inoculated today have found a place in the living room. The drill and other tools have found a semi-permanent place in a old cupboard easy to reach when necessary . A trail of sawdust on the floor from the backdoor throughout the house is a constant reminder that although the corona virus has stepped into our lives, captured us in our homes, the door is already open to see it leave.