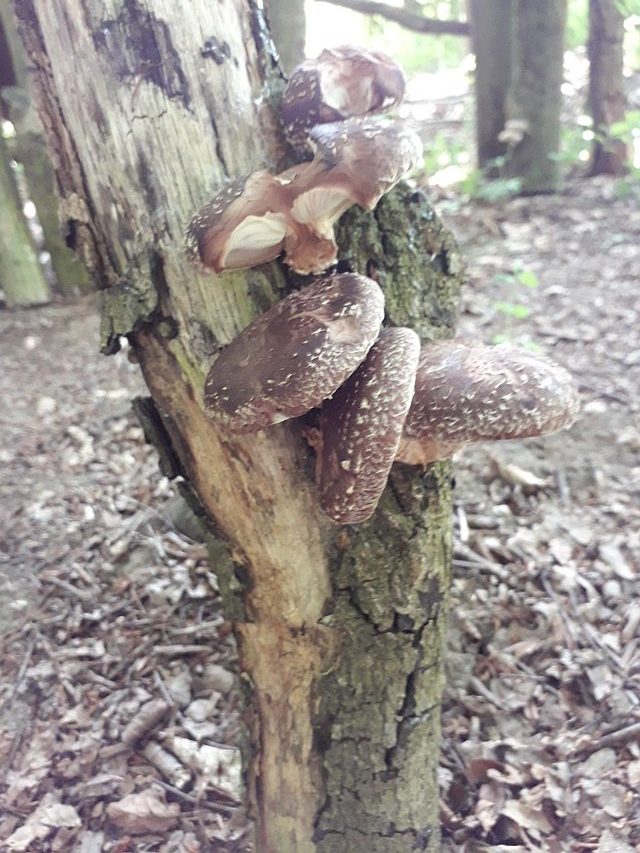 The inoculation season has ended. At last. About 800 hundred logs have been successfully inoculated with shii-take, various sorts of oyster mushroom, nameko and several other mushoom species.  Nice shady places have been found for the logs so that the mycelium can steadily grow through the wood the next few months. The shii-take and nameko logs will be ready next year, a number of the oyster mushroom logs should produce mushrooms later on this year. It is now a question of waiting and making sure that the logs have enough moisture away from the sun and the wind.  It was an unexpected hectic season with the corona-virus and I hope that next year all the well thought out plans can be successfully carried out without too many hitches.
Once the inoculation phase has ended in April, the following phase is just around the corner. Shii-take logs in production can be soaked in May when the air temperature is warm enough to encourage mushroom growth. Nice-looking shii-take logs that have not yet produced mushrooms and productive logs with irregularites (that cannot be sold) are eligible. Only shii-take logs with intact bark that have produced shii-take mushrooms twice can earn the title of “Edible Wood”. These logs are the top of the range and can be sold to customers. Productive logs with imperfections are usually not sold and continue on in life internally  as “Mushroom Logs”. Their main task is to produce mushrooms.
Of course the logs do not know what is going to happen to them but I do. The first soaking of the year is a mixture of positive tension, relief and happiness because it is the start of the shii-take mushroom growing season.  A time when you can expect results from all of the previous work and care.  About 50 logs simultaneously can be soaked in the container at my largest Edible Wood Farm. One of the first selections this year was a stack of Mushroom Logs, productive logs with loose pieces of bark, generally looking rather haggard. Several logs looked more dead than alive and I was rather dubious if they would find the energy to do anything at all. Splash! – into the cold bath. Two days later they were removed and dripping wet placed against a single log rack. During the next two weeks I waited eagerly for the first signs of shii-take mushrooms. The logs received a shower from the sprinkler twice a week and I hoped that despite the dry weather that this would be enough to stimulate growth. You can’t hurry a mushroom and it is not always easy to be patient.  This week when I visited the Edible Wood Farm again I was pleasantly surprised with the results. Although a small number of better looking logs had not (yet) reacted to their cold bath, most of these logs had done their best to produce their edible ornaments.  Even quite a few of the less appealing logs had also decided that life was worth living. This was an unexpected surprise but good to see and it just goes to show that you can’t judge a log by it’s bark.