Last week I had an easy week because I was stranded at home. My van had broken down on Friday (wk 24) and it took a whole week to get the necessary part delivered to the garage. Luckily I was able to use a replacement car so that I could go to the Edible Wood Farm in Gaanderen to check on the logs. It is about an hours drive away and I sometimes take my dog and a friend’s dog along if it is not too hot, too cold or too wet. This time I took my dog, Lotte, and Yoshi, a young American Akita, with me. After having arrived at our destination we went on an energetic walk along the creek and then I tied them up to a tree with an enormously long rope. They were free to choose their following activity: dig holes, chew fallen branches, watch me walk back and forth or just close their eyes and sleep (favourite choice).

It was nice to be in the forest again after many hours sitting in front of the computer screen. The main task this time was to make a final count of the logs that had been inoculated in the spring. Not an easy thing to do because all of the logs looked more or less the same and the stack of logs to the left looked just like stack of logs to the right. It was easy to lose track… and it is probably not surprising to hear that I had to count everything at least twice. After finally completing the task, I looked up to see how the dogs were getting along. Instead of seeing a couple of doggy bodies lying languidly on the ground, I saw a blonde bear-shaped animal with peaked furry ears trotting towards the creek. My clipboard flew in the air and with a screech I clambered over the logs and ran after him.

Yoshi was surprised to hear me make such a noise and halted his imitation of a young deer with not a care in the world to turn around and look at me. I attempted to look like an unstressed human just wanting to join in his new adventure and encouraged him to come to me. Fortunately, he quickly reassessed his agenda and a couple of minutes later we were nose-to-nose and one minute later Yoshi was in the back of the van. And stayed there. With closed doors. And quite satisfied despite his short adventure. I have no idea how he wormed himself out of the harness. It would have been interesting to see but I am quite content to let that be a product of my imagination. 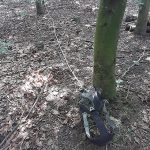