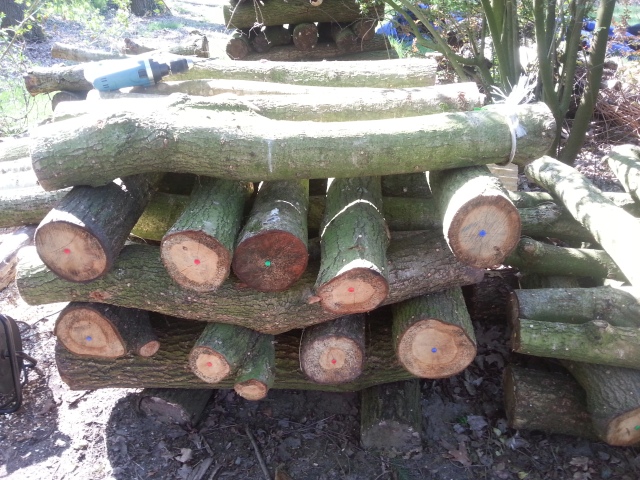 Every year I try something new in order to improve the results of the shii-take logs. This began after a couple of depressing years of poor results. There were always enough good logs to sell but there were also too many logs that made good firewood. I started to keep track of all sorts of variables and wrote down when I carried out different phases  of the edible log trajectory. During the quiter summer months and sleepy winter weeks, I had enough time to try and figure out if there was a pattern because of weather conditions or because of man-made factors.  Not being a statiscal wizard, it sometimes felt like working with a gut-feeling combined with the vague remnants of maths classes from a  prehistoric period at University.  Neverthelss, I was slowly able to improve techniques and the number of logs destined to become firewood steadily decreased. Discussions with colleagues and information out of technical books also played a useful role.
This year I have decided to keep track of the flowering period of the different shii-take variaties. The shii-take logs have been decorated with cheerfully coloured drawing pins. White ones for the winter shii-take mushroom logs and red, green and blue ones for the summer flowering shii-take logs. The drawing pins have been pushed into the heartwood (but some of my assistants don’t know the difference between sapwood and heartwood) so that I can keep track of the logs throughout the growing season. Winter shii-take mushroom logs can flower when the temperature is still quite low and I want to know how many of the logs do this outside of the official flowering season  (May – October/November). Valid Results can be passed on to the customers who can choose a log with a certain flowering period and other small mushroom log farmers can also choose to extend the flowering season by concentrating on the cultivation on winter shii-take logs early on and later in the year.