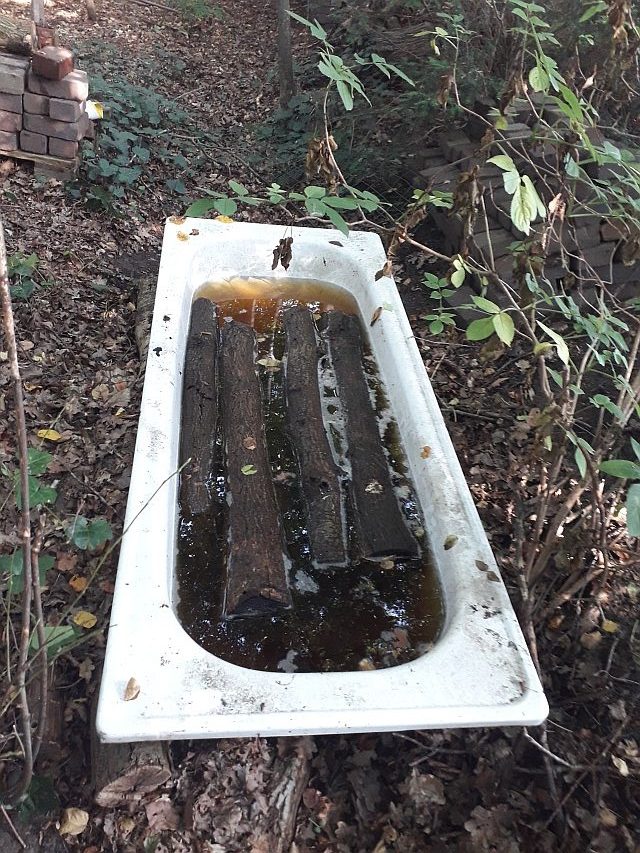 July 2022: When is the best moment to soak a shii-take log? That is one of the questions that has lingered in my subconscious for a long time. There is not much precise information about this subject and the best way to gain some idea is to keep track of field work. One thing is certain, the mycelium should have successfully colonized the log and the log should be dry before soaking.
Last year, 2021, was a wet year, so wet that most of the logs were usually too saturated to be successfully forced to produce mushrooms. The years 2018-2020 were dry and warm, often with a low air moisture content. I used the sprinkler a quite a bit to increase the humidity under the beech canopy at the Edible Wood Farm in Gaanderen, twice a week at least. The crowns of the young beech trees had grown so close together that the air became misty and the moisture evaporated very slowly – perfect! The logs reacted really well to these conditions despite the extreme weather conditions.
Colleagues in Ede have a more extensive and well-established sprinkler system and during the same period they used it more often and longer. In the autumn of 2020, the weather turned showery and in combination with the use of the sprinkler the logs were almost constantly wet.  The shii-take mycelium was not happy and young logs in development became infected with competitor fungi and this year many of these logs have lost their bark and are out of production.
This year has been going quite well until now. Sometimes the day temperature was quite high but the corresponding night temperature was often low resulting in substantial dew and cool morning conditions. Quite a few of the logs that were inoculated last year in March have already reacted to a rain shower and/or a low night temperature by spontaneously “flowering” – earlier than expected but this a good sign.

Conclusion? It is better to have a dry, warm year and to be able to create a suitably humid environment (but not go overboard) than to try and work with shii-take logs in constantly moist surroundings.

Foto’s: A nest with blackbirds. A banner from a Food Truck was used as protection once they had been discovered. Too wet or too dry? Just right! The young birds grew too big and moved on….