What can you expect to find in a vegetable garden? The answer is quite obvious and can also include fruit such as berries, an apple tree or two and a range of aromatic herbs. But…. where are the edible mushrooms?

My first harvest this year in my new vegetable garden was early on in the spring. Whilst I was slogging away preparing the ground for the coming season and hoping that the minuscule seeds would somehow turn into full bodied vegetables, the sudden appearance of blue oyster mushrooms (Pleurotus ostreatus) was a welcome surprise. A month or two later branched oyster mushrooms (Pleurotus cornucopiae) greeted the world and a second flush a couple of weeks later produced enough individuals to share with colleagues. 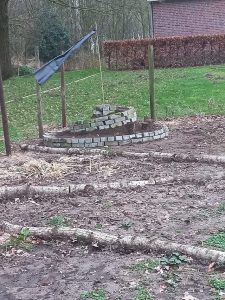 These oyster mushroom logs had not been sold the year before and I had decided to use them to separate vegetable beds from each other. One third of the log had been buried horizontally in the ground and I was curious if they would be able to survive in an open situation. In a shady corner, timeworn shii-take logs stood upright surrounded by leftover short stocky oyster mushroom logs. Any production whenever was welcome, but they have already been responsive and have delivered mushrooms as well!

Want to know more? Send me a message – info@groenetakken.nl