This year could be called “The Year of the Slugs”. There are so many of them. My colleague in Gaanderen has already caught 2000 slugs the past month in her forest vegetable garden (about 200 m2). Earlier this year in February at the Edible Wood Farm I made several beds of wine cape stropharia (also known as Garden Giant). The woodchips were from felled trees in the surrounding forest. The mycelium spread quite rapidly through the woodchips and by the time it was summer the woodchips were all stuck to each other like glue.

The first flush of wine cap stropharia caught me by surprise. In June after a dry spell (enormously wet weather this year) the first caps as big as golfballs poked their way through the mass of woodchips. Photo’s were made and the frying pan was placed ready for the expected meal. A day later there was nothing to harvest. Caps with gigantic holes and remnants of whole mushrooms were all that was left of a promising meal. My meal.  Beaten by a slug.

One thing that can be said about mushrooms, they keep you on your toes. Once again I was surprised by the appearance of the latest flush of wine cap stropharia. This time there were many more individual mushrooms at different stages of growth with enough mature mushrooms to harvest. This week I was faster than the army of slugs hiding out in the undergrowth. The mushrooms ended up in my kitchen and I made a wonderful risotto also with shii-take mushooms, onions and beans. The colour of the rice has nothing to do with the wine cap stropharia, it’s the beetroot! 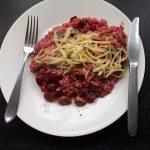 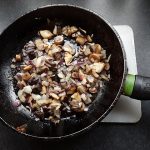 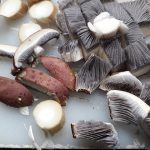 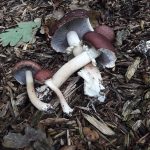