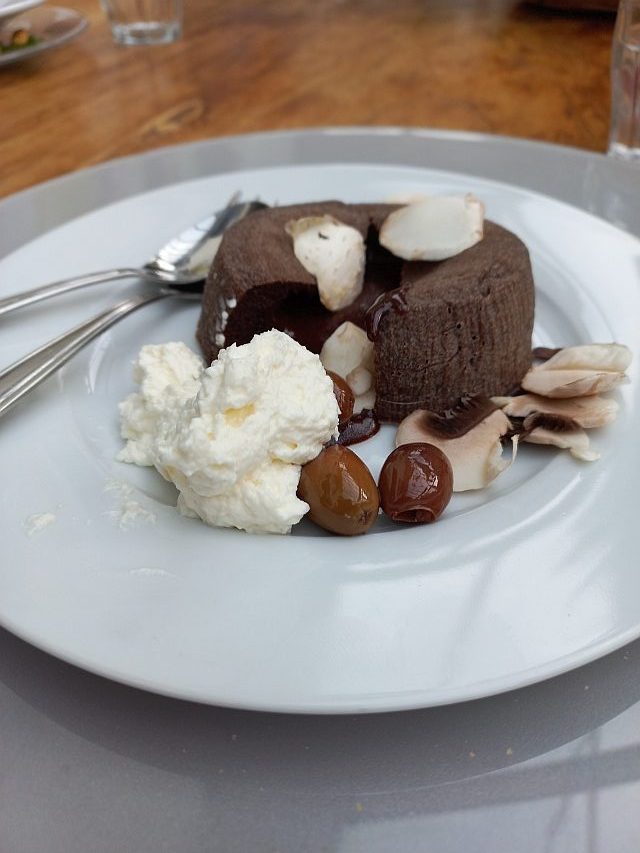 May 2022: An edible mushroom dinner in May? It is no big deal buying mushrooms at the market or in the supermarket but using everyday mushrooms does not have the attraction or challenge of presenting a complete mushroom orientated 6-course meal. We wanted special mushrooms in unusual dishes, with a meatless entourage and seasonal variety. And with a little bit of stress, it all worked out.

The collaboration on this Sunday evening in May was with Gerhard Bathoren and Norbert Mergen from MergenMetz in Doorwerth. MergenMetz is a small company (two couples) that specializes in promoting a better way of life by going back to the roots in the garden and using all sorts of (edible) plants to achieve this. Their way of life is mirrored in their work and their workplace is also their home.

I have known Norbert a number of years now and he is always looking for innovative ways of keeping his 6000 followers entertained and interested. Gerhard (and his wife) joined the team a year or so ago and his cooking talents were able to be used at last now that the corona regulations had been lifted. My suggestion last autumn of an extended mushroom meal in the springtime (partly in jest) was accepted with unexpected enthusiasm, even though they had not much experience working with mushrooms.

Gerhard and Norbert had spent the week before the dinner searching out new / suitable recipes and jostling them around in order to make a logical combination. Not only were wild mushrooms on the menu but also cultivated exotic species and (out-of-season) dried wild mushrooms.  I had given them a list with possible wild mushrooms with a warning that the availability and quality was dependent on the weather situation. No rain meant no mushrooms, too warm or too cold meant unsuitable-for-consumption mushrooms and I had to find them first of all. During that week I had kept an eagle eye on the daily weather chart and luckily it was a showery period following weeks of no rain. My romantic idea of going foraging after a sturdy rainshower did not work out because the weather forecast was not accurate enough. Light rain fell instead of a heavy shower and in other places more rain fell than expected. Luckily I had enlisted the help of several colleagues and between us we were able to come up with a small number of wild mushrooms just enough for a small portion per person (and that is how it should be). Naturally the two cooks wanted to do their best and were keen on trying out the recipes before dishing them up. Their request for mushrooms for a trial run on Monday led to a short dose of stress because the mushrooms could only be found and delivered later on in the week. Fortunately these mushroom-men-in-training were made of resilient stuff and on Thursday I could relieve their light sense of panic with the news that I had a giant puffball, chicken-of-the-woods, morels (wild), shii-take (Edible Wood Farm) as well as hen-of-the-woods and nameko (both cultivated) for them.

I arrived late Sunday afternoon with no idea what to expect. My task (besides delivering the mushrooms) was to entertain the guests in between the dishes. The massive 12-person wooden table was looking good in the conservatory adjacent to the professional kitchen in Gerhard’s house. The view outside overlooked the small orchard and chicken run bordered by giant hosta’s and high green hedges on both sides. Inside the newly arrived guests were very curious and eager to find out what they would be served up that evening. Seven out of the eleven guests were well acquainted with button mushrooms and the occasional oyster mushroom but nothing more. The other two couples were dedicated foragers and experienced cooks, another level altogether.

Gerhard and Norbert began the meal with roasted ceps on olive-oil drenched toast, followed by crunchy shii-take ice-cream. This surprisingly tasty sweet-umami delight was followed by hen-of-the-woods soup made with the soaking liquid from the rehydrated ceps. The next dish was a chicken-of-the woods and French cheese combination in a filo pastry bag looking like it was full of Christmas goodies. The meal continued with homegrown spinach and Brave Hendrick (Chenopodium bonus-henricus) jointly forming a platter for the superbly grilled slice of giant puffball, soft and delicately spicy. The nameko mushrooms were tasty decorations for this main dish. And at last, after being continually surprised with these incessant culinary sensations, the dessert brought tasting mushrooms into a whole new realm: a small cake oozing chocolate sauce, clotted cream with lemon curd together with thin slices of white button mushrooms and young olives.  The guests and I all agreed that the meal was a monumental success! Well done Mushroom-Men!